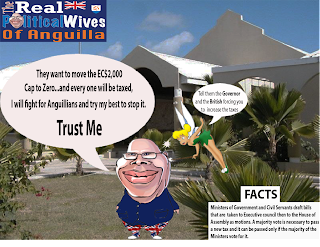 The Parliamentary Secretary took to the floor of the “House of Assembly” this week and disputed allegation of “Questionable Governance.” The Secretary’s demeanor appeared defensive as he tried to explain away speculation on how the Ministry of Tourism is handling business on behalf of the people of Anguilla, appearing to be dancing a waltz but not having the band in tuned it turned out more like a wriggle. Dealing with the issue of the pier in St. Maarten and attempting to dismiss assertions, the Secretary washed his hands, claiming that he too has been asking questions. He railed on endeavoring to put into perspective what now appears to be a chaotic undertaking which could emerge as a major scandal. Trying to separate the role of government from that of the Tourist Board he claims is directly responsible for this project, he fell short of explaining the function of that Board, and its relation to Government. How does the Tourist Board acquire funding, and if by means of subsidy? Now, that questions are raised, the Secretary seems to be aware that there are plans by Juliana Airport to extend its development, to which the area in question, being in very close proximity will be affected, he still seem to want to justify expenditures in excess of $300.000.00 in a project that most certainly will be short lived.

It is not enough just to be defensive, or to be grandstanding in the public arena with issues of serious importance to the people. Besides all that is now known, there is much more not revealed, and if all is known, there would be no need for speculation. The strange twist to this matter is that the Secretary appeared to have had all the answers, and appeared adamant that stories being told do not conform to the truth. In that same breath he appeared to have ordered an investigation into the matter. What is the Secretary investigating? On a point of clarification, The Secretary must give reason, to why he continues to be paraded erroneously as a Minister of government; and explain the people of Anguilla by what process of confirmation has the honorable title of Tourism Minister been bestowed on him? This is a false pronunciation of duties that are without legal or legislative merit. Parliamentary Secretary is not a Ministry; it is an administrative function, and to continue this false premise, is certainly of great offense to the people of Anguilla. Further in perspective, it might rise to the abdication of duty of the Opposition Members in the House of Assembly to allow this to continue without reprimand and correction.

The direction of our tourism is of serious concern to everyone. This team has not done much so far in revitalized the industry. Our numbers are very insignificant, while St. Marten continues to be an extraordinary destination, in excess of two million visitors per year. The obvious remark would be, Anguilla can’t be compared to St. Maarten! Well why not? The land mass of Dutch St. Maarten is half the size of Anguilla, which means that our planning mechanism in tourism, and general economic affairs may need a systematic review. But we cannot continue to view St. Maarten as our adapted parent. There may be no easy way to develop a vital resource as tourism to spur economic growth, and dealing with these issues on a daily basis may indeed be a task for any government. If so, then this government should apologize for their relentless criticism of the former government. Be that as it may, the country simply cannot afford incidentals or blunders with extraordinary cost to the people. Projects like these must fit in a larger picture of tourism planning and development. It is known that Government recently approved a Tourism Master Plan for the island; it should be inquired if the development and establishing of a facility like this in a secondary, foreign country is part of that plan, and will such an experiment work in our primary interest, having a daily operating expense with larger obligations.

We have an already established ferry service that needs extensive revitalization and management to service the industry better. A service that experienced extraordinary growth from the time of captain Mussington and one vessel, today having more than enough vessels to service the trade, so we compete against ourself. Scrutiny of government and its activities is becoming a prime concern under present conditions of the country; the Secretary must understand, and humbly accept that he occupies public space for one reason; that is, in the interest of the public. His extended remarks on “Questionable Governance” expressed outrage, claiming that such questions border on slander and warrants legal review, which I adamantly disagree, current economic conditions of the island has made it the duty of every Anguillian to understand their government, and agree when, and where necessary, but insist that adequate governance is a demand.

By: Elliot J. Harrigan
Posted by Realist Spikenice at 12:54